Recently a fellow team member challenged me to recreate the new Spotify “Like” button using only CSS. Honestly I’m not sure if he challen...

The value of Promises in Javascript cannot be overstated. They are used everywhere, helping to navigate the asynchronous maze that comes ...

If you have been working with an icon set and noticed that your icons are not vertically centered, then you are not alone. I was working ...

With the release of our CSS Framework, Platform UI, it might be fun to actually build something with it! At RitterIM, we have an interna...

It’s been a few years, several great people, an awesome company, and a cool thing we made 😀 Once upon a time, we had a mixed bag of fram...

I’m a huge fan of animation on the web, especially when it comes to user interaction. A simple way to include such a thing on webpages is...

I dedicate this blog post to all the QA testers that expose all the flaws in my code. For a few years now I thought I had it all figured...

One of the perks being with Ritter, and on the dev team, is you can choose the hardware that makes you happy and productive! Team members...

As a technical writer, I create software documentation. But many times, I find myself looking at in-product copy and wondering about cont...

Docs and contextual help We recently started a push towards integrating Docs content into our software platform. The goal is to pull in...

Have you ever wanted to change the value of a Sass variable based on screen size, a state, or for any other reason that might require cha...

Ever been confused about naming a branch with Git? Looking for a good naming convention? Well, I might have an answer for you. I’m not sa...

We often use GitHub to create a compare view, and list pull requests (PRs) for releases. However, GitHub limits the number of commits you...

Using our Hugo-based documentation site, we typically publish release notes once per week. My usual process includes the following: M...

As someone who basically gets by when it comes to writing Javascript, I tend to look at things from a “I bet I could do this with CSS” st...

This is an updated post of the original here. Whether you’re new to the frontend at RIMdev or looking for more about our Frontend team...

If you’ve ever worked in Azure Data Studio, you may find tab colors very useful. They allow you to visually separate different connectio...

If you’re not familiar with Platform UI, it’s a utility rich CSS framework we created. As we look to migrate all of our apps and static ...

Get ready to celebrate because, as of Friday, September 18, 2020, Evan You, creator of Vue.js, announced Vue 3 is officially released. He...

Typically with ASP.NET Core 3.1 when no specific authorization requirements are set all endpoints are publicly accessible. When you’re wo...

Written by Khalid Abuhakmeh
8
This post is days old.

Jekyll is a big part of what we do at Ritter Insurance Marketing. The platform empowers our staff to write and publish content often. The adoption of Jekyll worked out well, and the GitHub hump has been much easier to overcome that initially anticipated. There are definite tradeoffs to using a static site generator like Jekyll, mainly the lack of anything dynamic. This post documents my journey in getting some dynamic behavior to my static site, basically running Jekyll on top of Kestrel and ASP.NET Core.

TL;DR; Go to my GitHub repository and follow the readme.

You may be asking yourself:

Khalid, why would you want to do this?

When you break down what Jekyll is, it is a generator (duh), which means I have to make all decisions up front before creating HTML. The approach works for the majority of sites, but there are a few things you cannot determine in advance:

These are just a few additions I’ve thought about adding to a statically generated site. The dynamic functions may make up a small portion of the site, but they may be critical to achieving the experience I am aiming to create.

This post assumes a familiarity with Jekyll and that it is installed locally. I first start by creating a new Jekyll site.

The next step is to cd into the new Jekyll site directory and execute the following dotnet command.

Now the directory is a mix of ASP.NET Core and Jekyll, but it is not ready yet.

This is where the process gets tricky. The folder now has at least 4 build tools: dotnet, npm, jekyll, and gulp. I need to set them up to work together. The first step is to setup the Jekyll build configuration.

Notable configuration options are destination, which targets wwwroot created by ASP.NET Core. Secondly, the exclude array contains all the files and directory we don’t want going into wwwroot.

The next step is to remove our CSS building from gulp since Jekyll will handle building our SASS for us as part of its generation process. I also ensured I am creating the right files.

Finally, I need to tell our dotnet-cli to run both jekyll build and gulp. The following is from the scripts section of project.json.

I am building now, but still need to tell ASP.NET Core to serve both static files and default files like index.html. In Startup.cs I add the following two lines, followed by the registration of ASP.NET MVC. 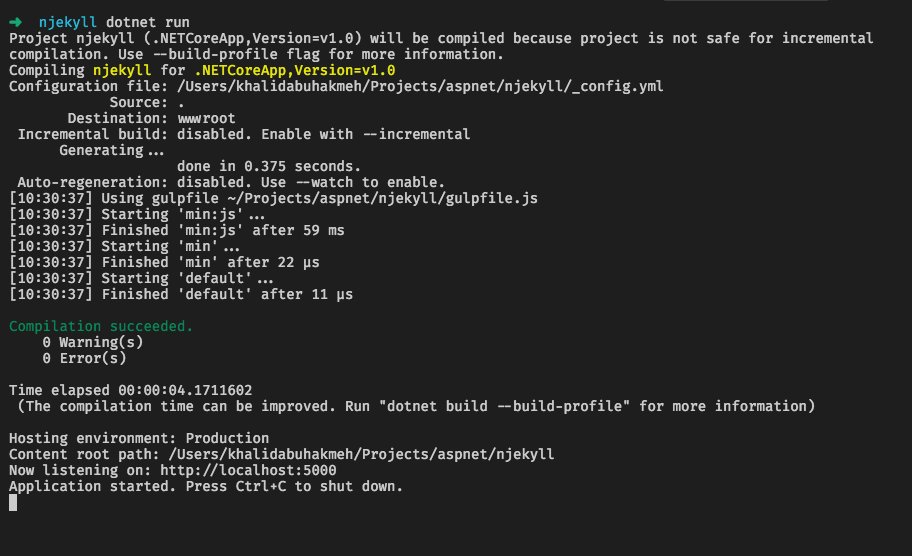 See the site running. In my example, I have a test controller that returns a simple content result. 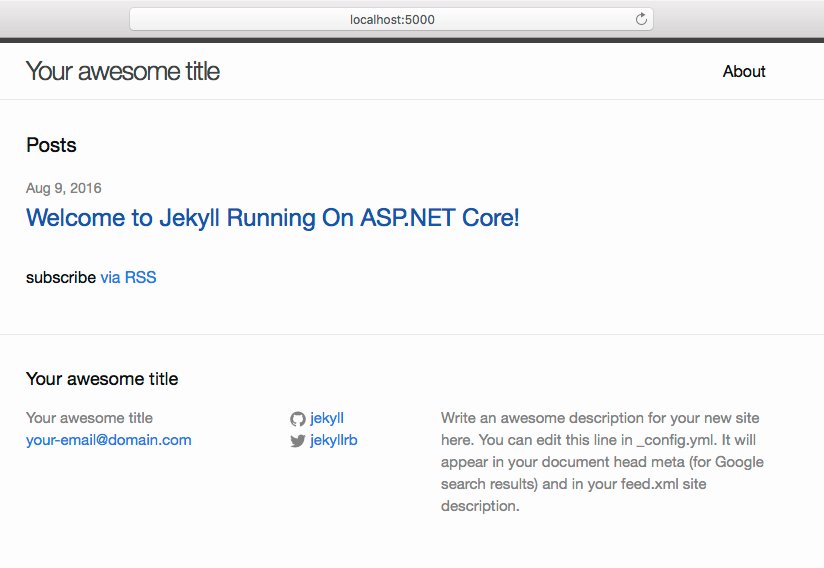 If you want a working sample, go to the GitHub repository and try it out.

Most sites can operate as static sites, but there will always be a need for dynamic content along the way. The introduction of ASP.NET Core and Kestrel are compelling reasons to embrace a cross-platform solution that uses the best of static and dynamic technology.

asp.net core
We’ve been using Swagger via Swashbuckle for some time with our ASP.NET Full ...
Read now

asp.net core
Here at RIMdev, we are unapologetic about our love for static websites. Folks...
Read now

asp.net core
Feature flags can be useful for changing the runtime behavior of an applicati...
Read now

Stay fresh! The brighter green, the fresher the article!